What are the rules for mouthguards in boxing

In modern formal competitions, the official generally mandates that athletes must wear mouthguards when they play. Mouthguards should be of appropriate size, and if athletes do not bring their own mouthguards, the host is obliged to provide these athletes with mouthguards. Athletes should not spit out their mouthguards at will during competition, otherwise they will be warned. If the mouthguard is knocked out, the referee on the stage will pick it up, take the boxer to his corner, let the assistant wash it, and then the referee on the stage will put it on the athlete. During this process, the athlete is prohibited from talking to his assistant, and his opponent is to walk to the neutral corner. Boxers are not allowed to change their mouthguards at will. Athletes cannot start without a mouthguard.

Wearing a mouthguard can make the wearer’s mouth muscles be forced to bite at all times in a state of force, and the facial muscles are tight, which naturally produces a reaction force when subjected to external force. This is based on the principle of increasing the area and reducing the pressure. All the teeth and gums in the oral cavity are fixed into a whole, which effectively prevents the damage of the impact force to a single tooth. In fact, this and a chopstick are easily broken. There is a reason for the group to continue.

The mouthguard fits on the gums and teeth, forming a buffer between the cheeks and the teeth, which can greatly reduce the chance of injury to the oral soft tissue and lips, cheeks, tongue, teeth and jawbone. Fundamentally prevents the possibility of bleeding between teeth and lips, which would otherwise affect breathing. Effectively avoid the facial temporomandibular joint from trauma, if there is no mouth guard, it may cause the temporal bone fracture or even endanger the brain. With this reliable protective layer, the impact of attacking force on the mouth, head and neck is greatly buffered. 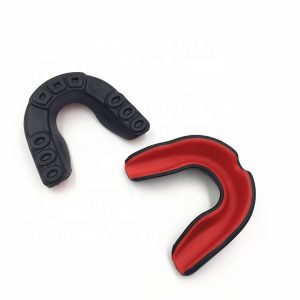